We woke up on our second morning in Beijing and decided to have breakfast right in our hostel to avoid the cold for a bit longer.  Once we got brave enough, we headed out into the icy weather to go to Tiananmen Square and the Forbidden City.

We got there by using the subway without any issues, but as soon as we got off there were TONS of people--which pretty much set the tone for the rest of the day.  Tiananmen Square is located right before the Forbidden City and it is the site of many important events in Chinese history. It even houses the body of Mao Zedong in a mausoleum that was built just for him. However, by the time we were there it was freezing, snowing, and crowded, so we didn't hang around for long before heading to the Forbidden City. 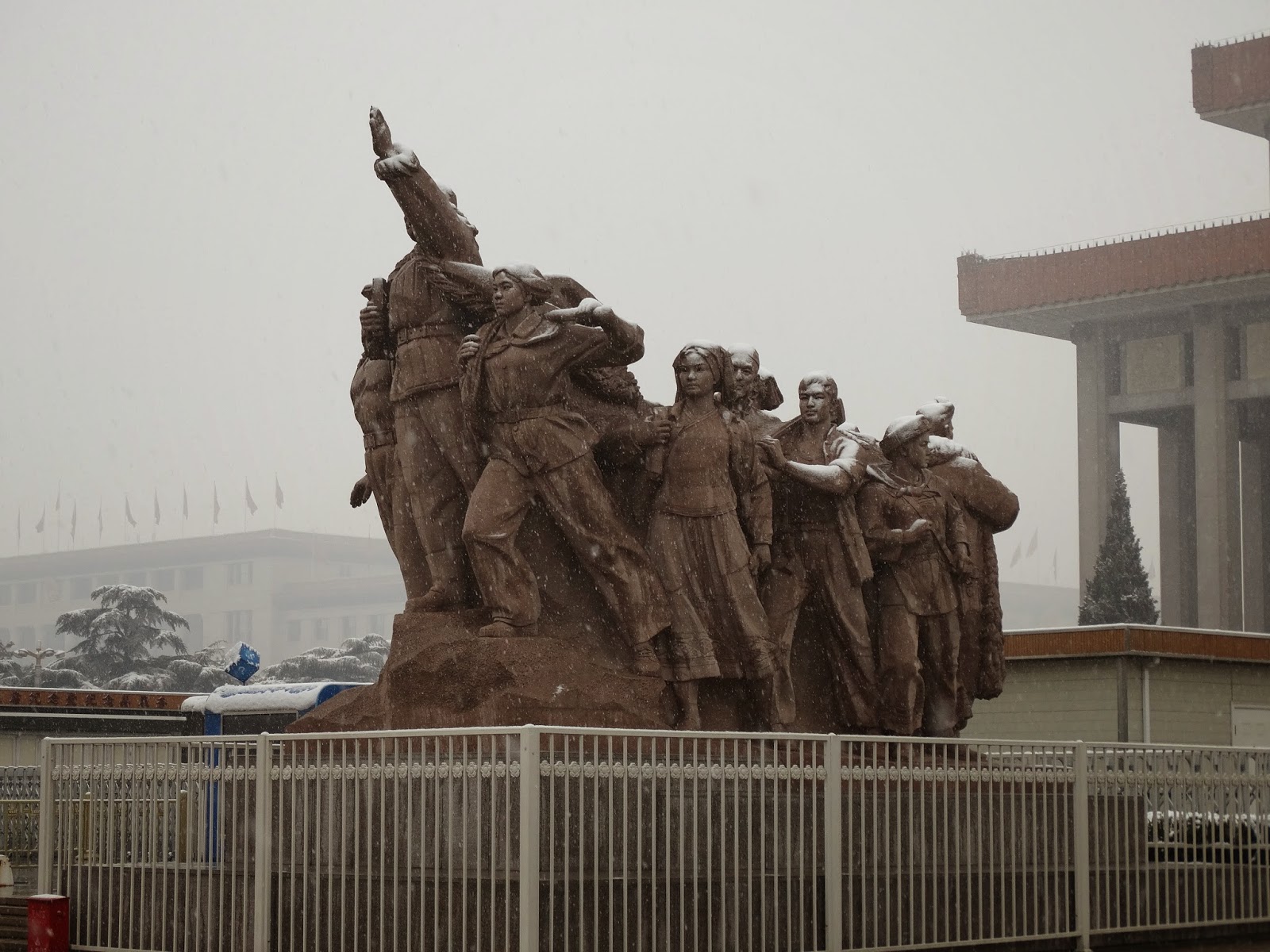 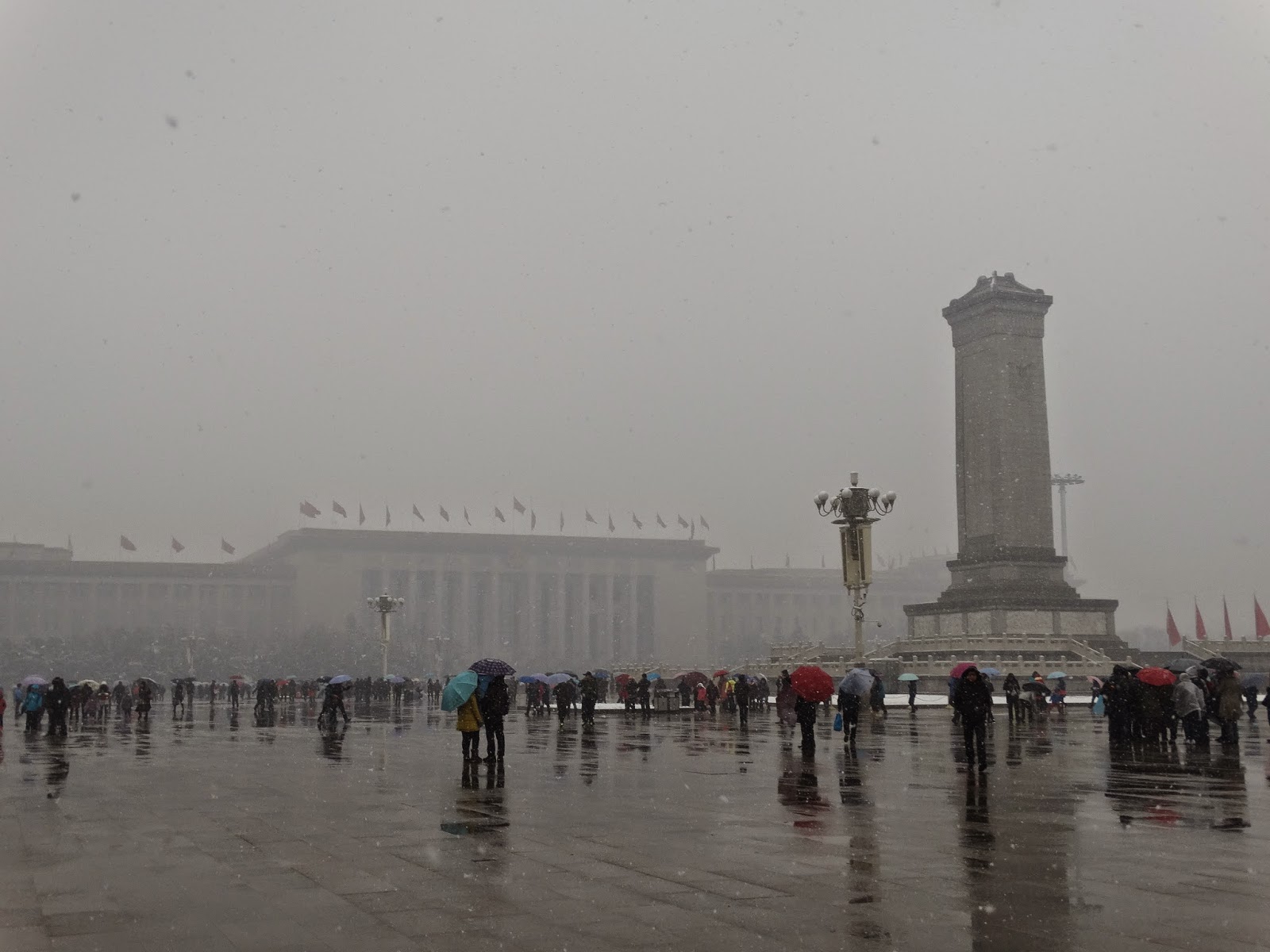 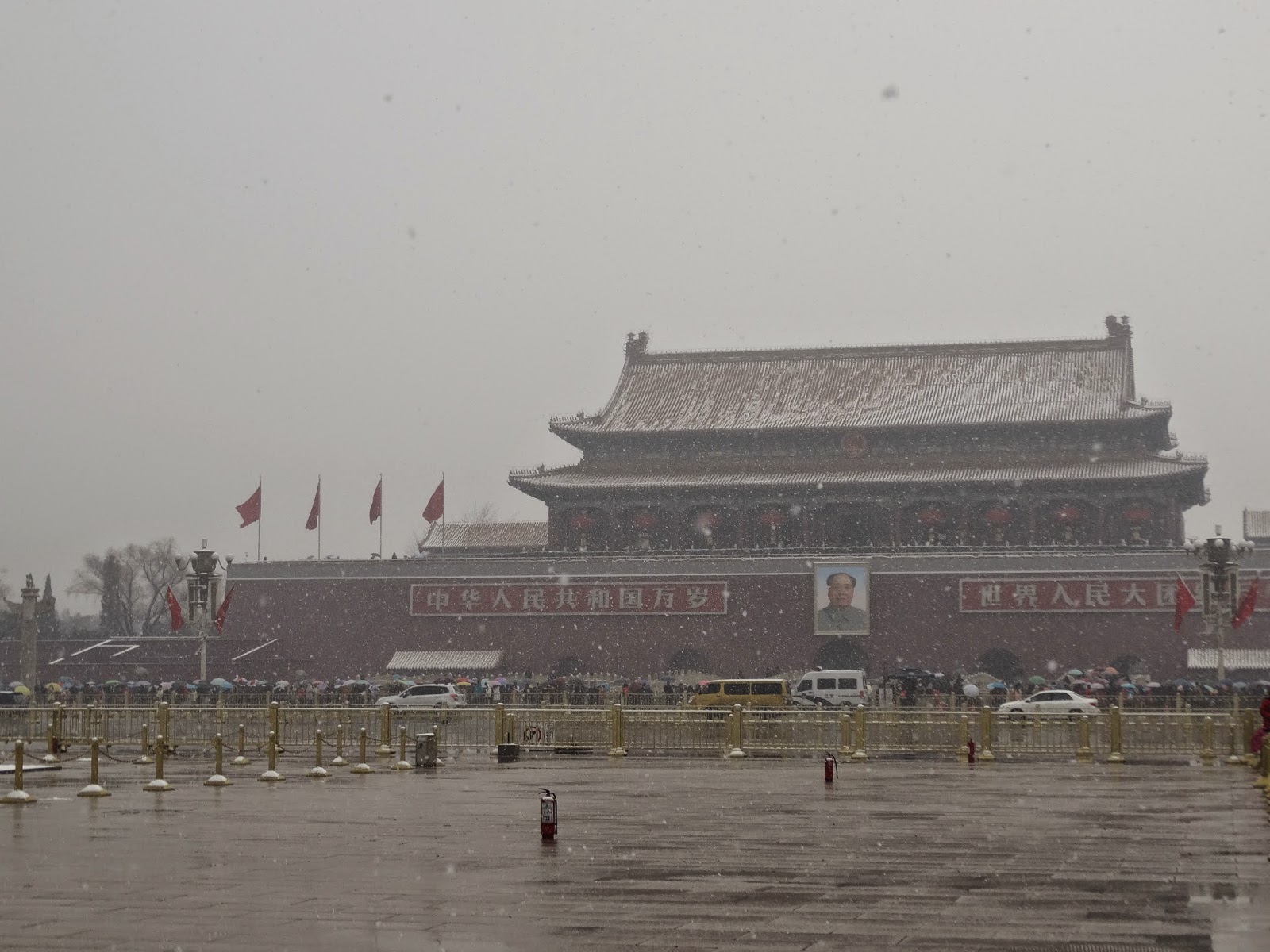 Once we got into the Forbidden City the crowds just got worse and worse. We were battling huge crowds of people just to walk anywhere.  Add in the snow and freezing cold and we weren't exactly happy campers. This was not the 50 degree weather that we saw in the forecast.

The Forbidden City was the Chinese imperial palace for nearly 500 years. The palace was only open to the emperor's family and those who had permission to enter, hence the name of the "Forbidden City."  The palace itself was huge and did look nice with the snow.  The girl who worked at our hostel said that people wait all season for it to snow because it looks so pretty on the palace. She said she had been waiting all winter to go see it in the snow, but this was the first chance.  This probably didn't help with the issue of the huge crowds...I swear all of China's one billion people were visiting on this day. 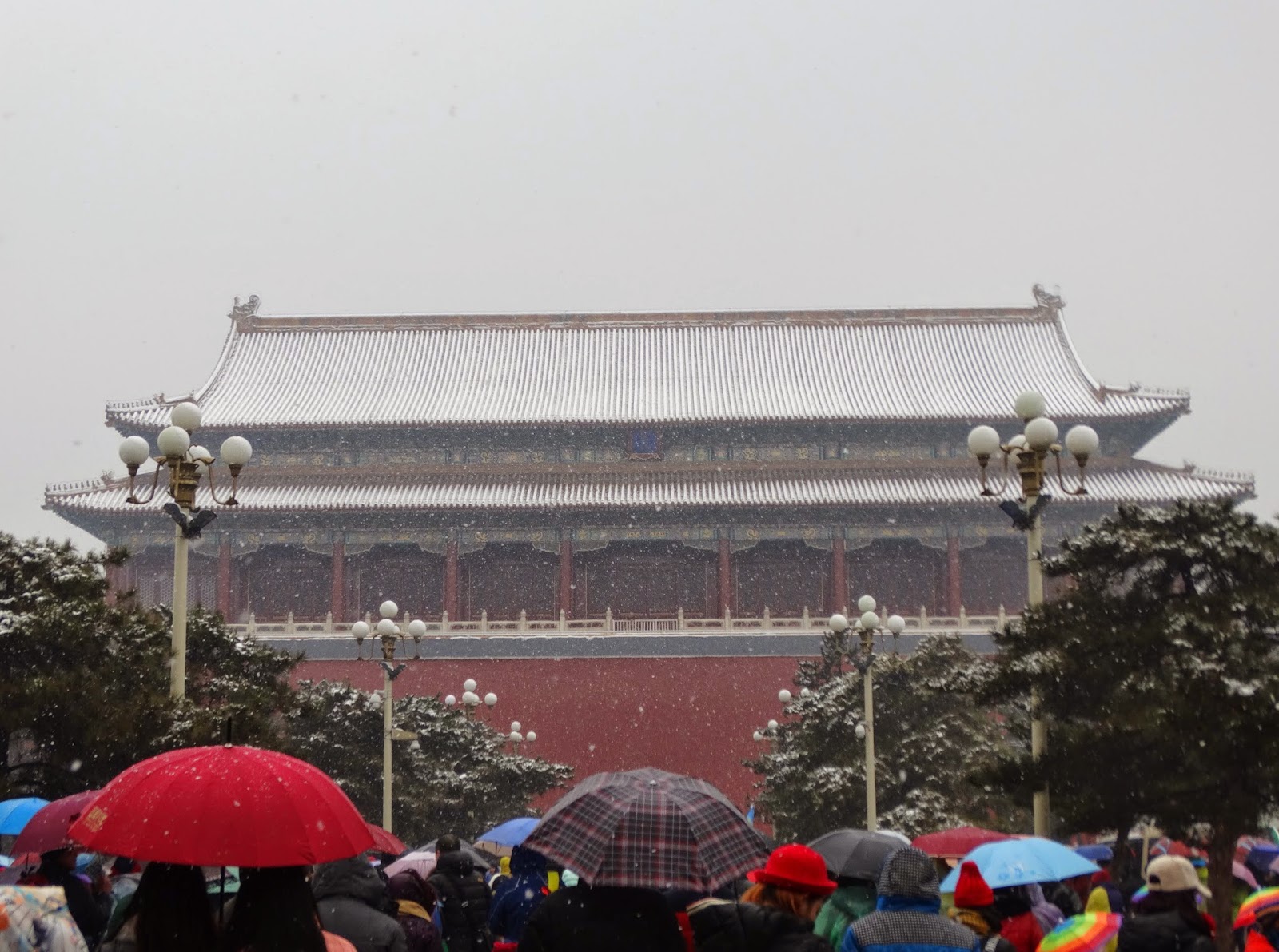 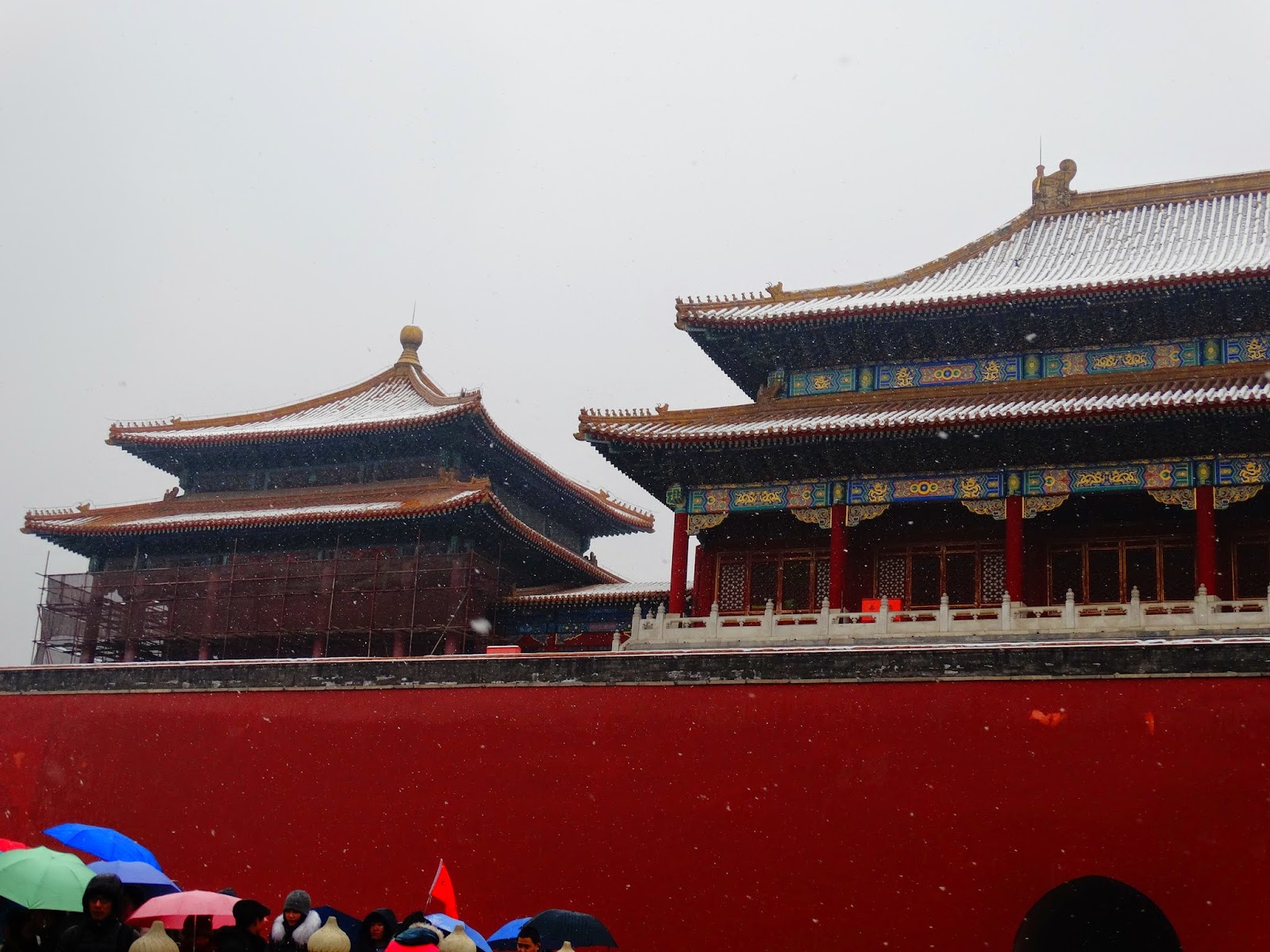 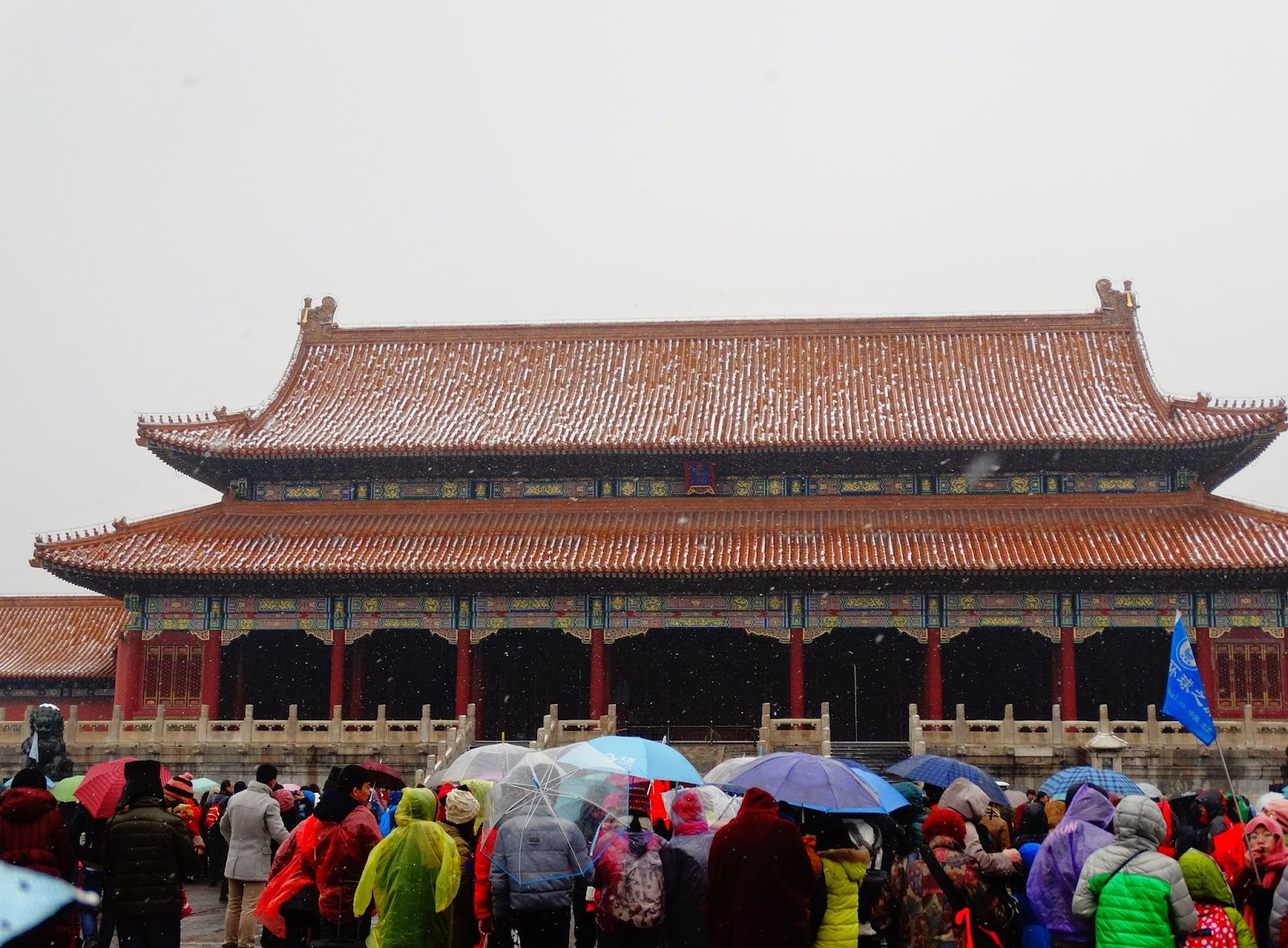 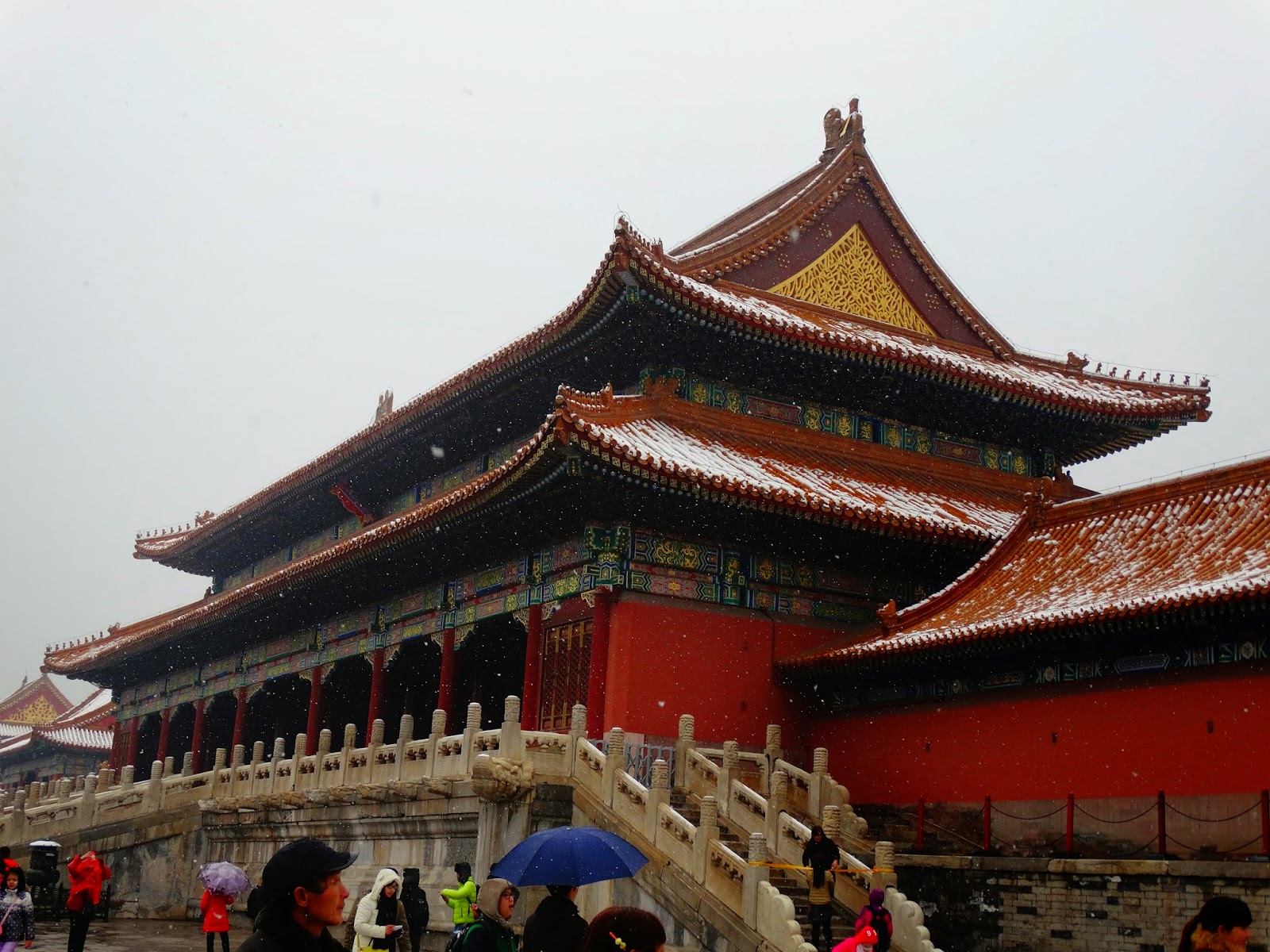 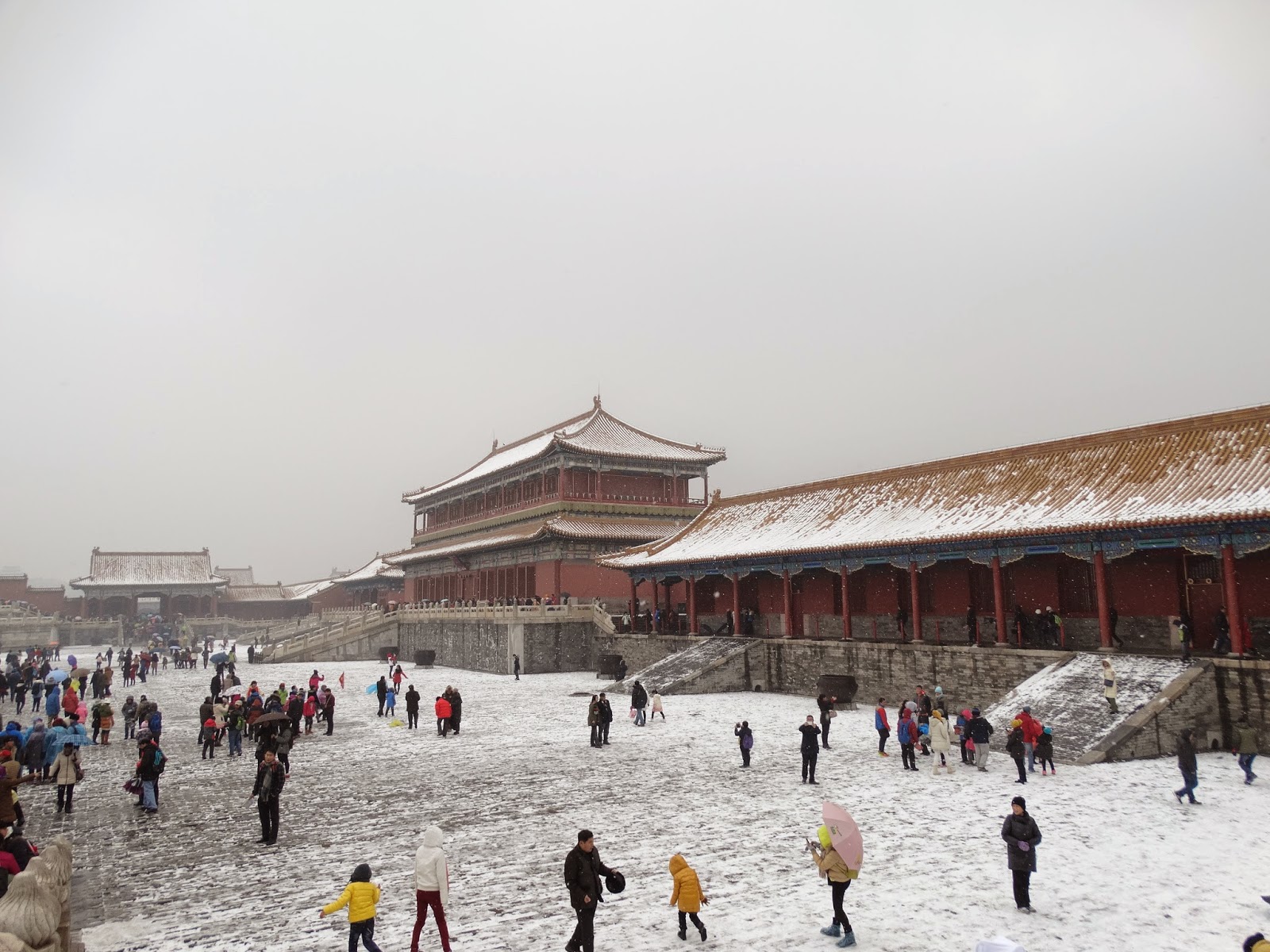 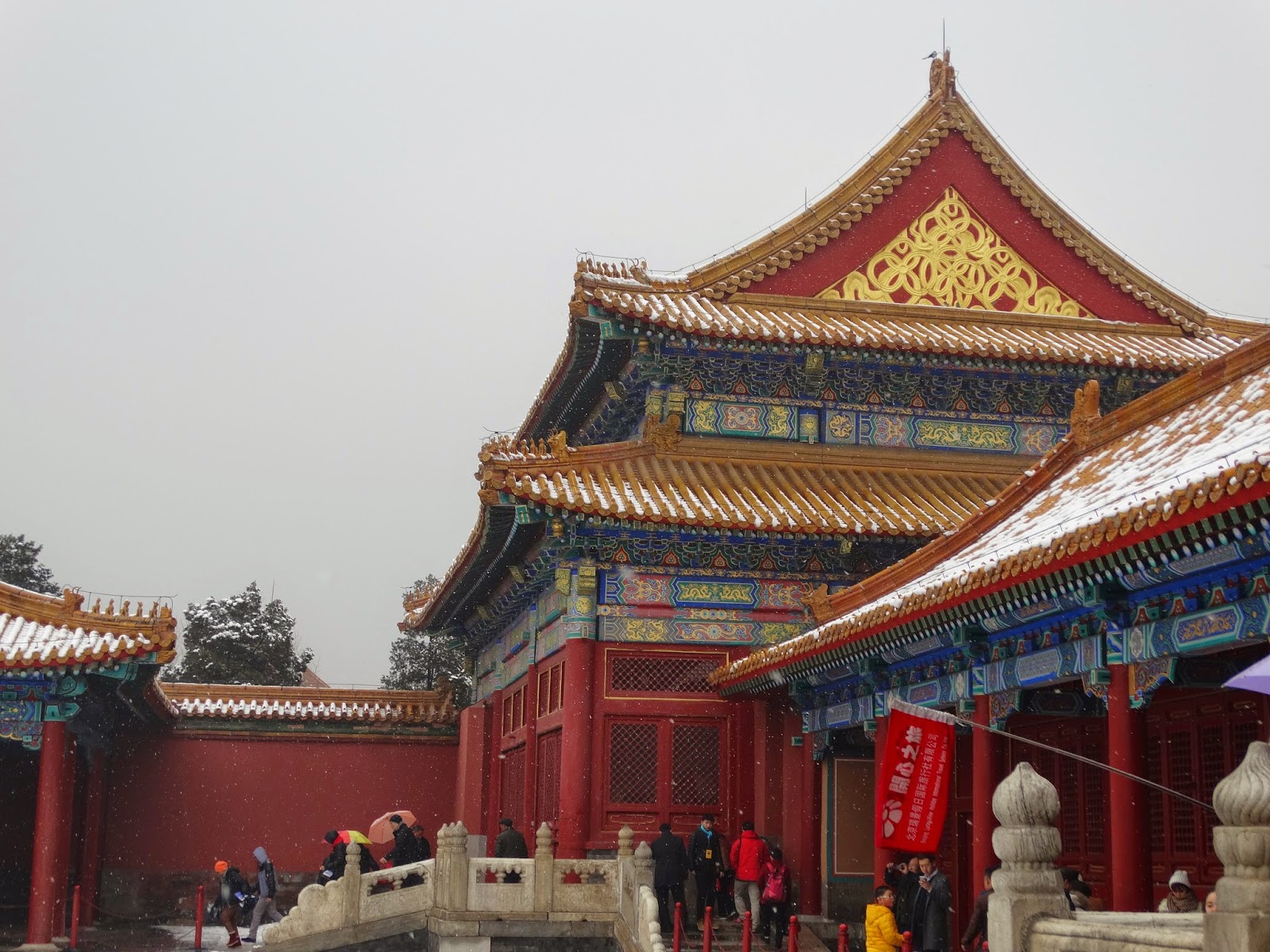 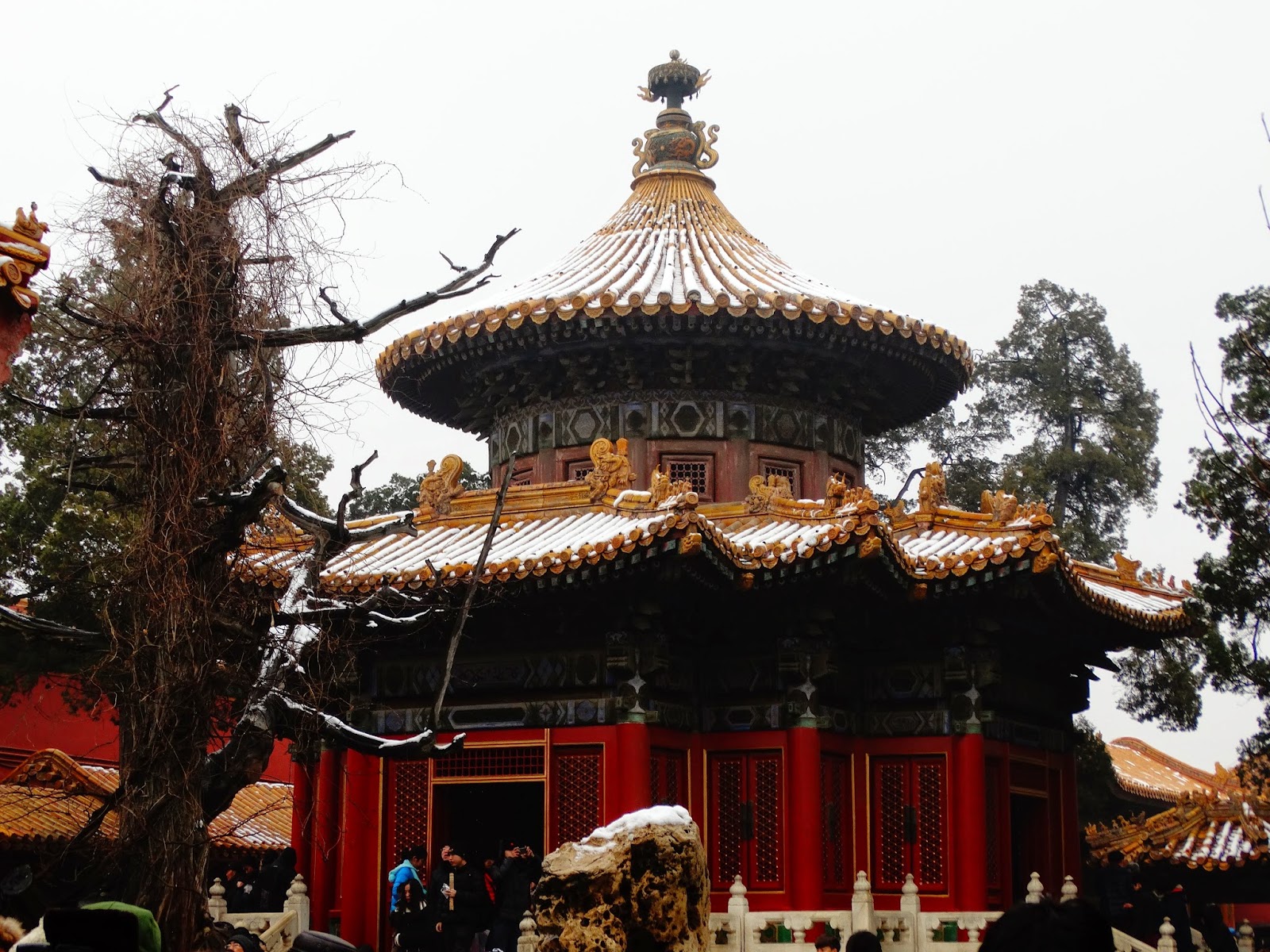 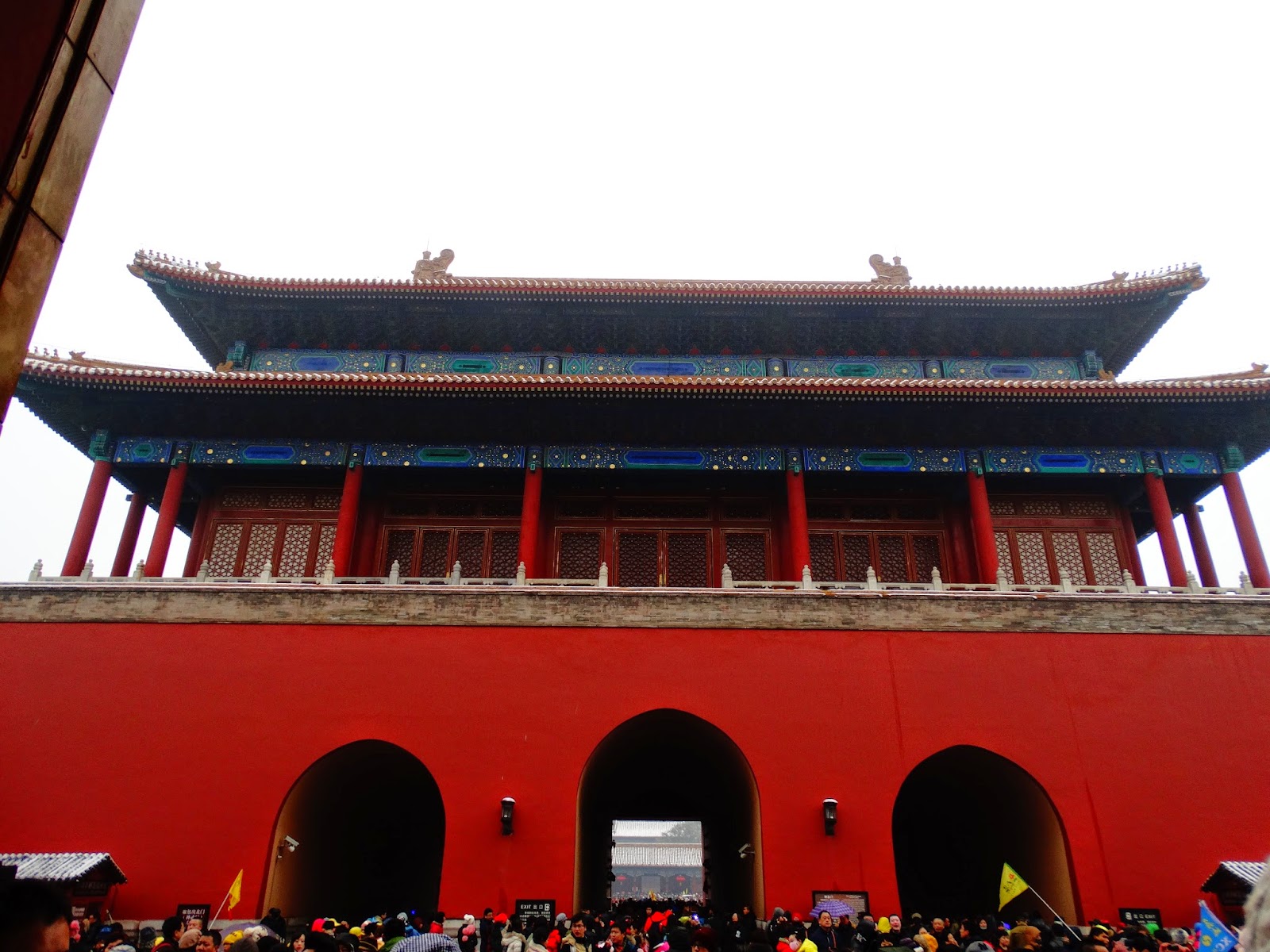 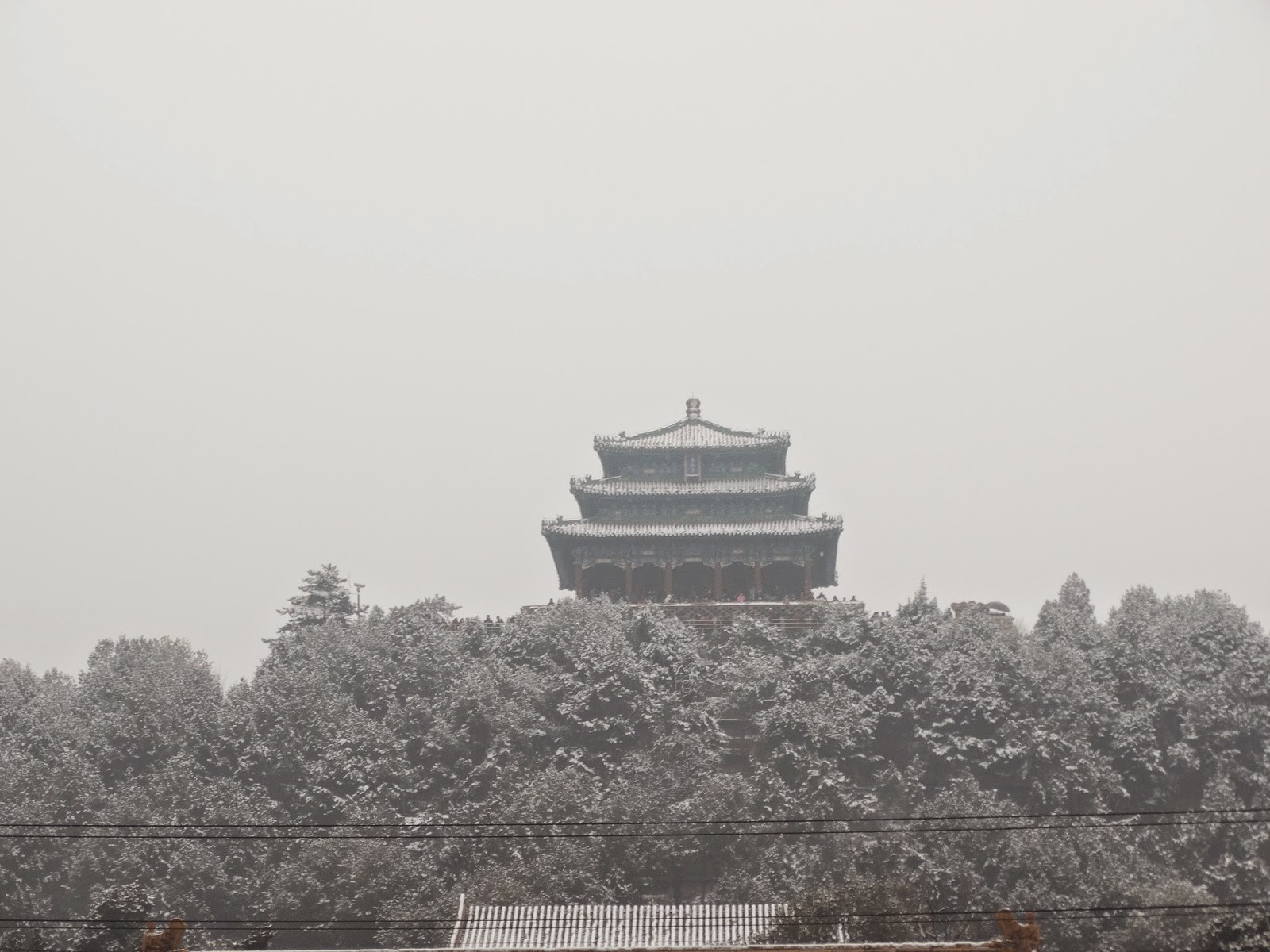 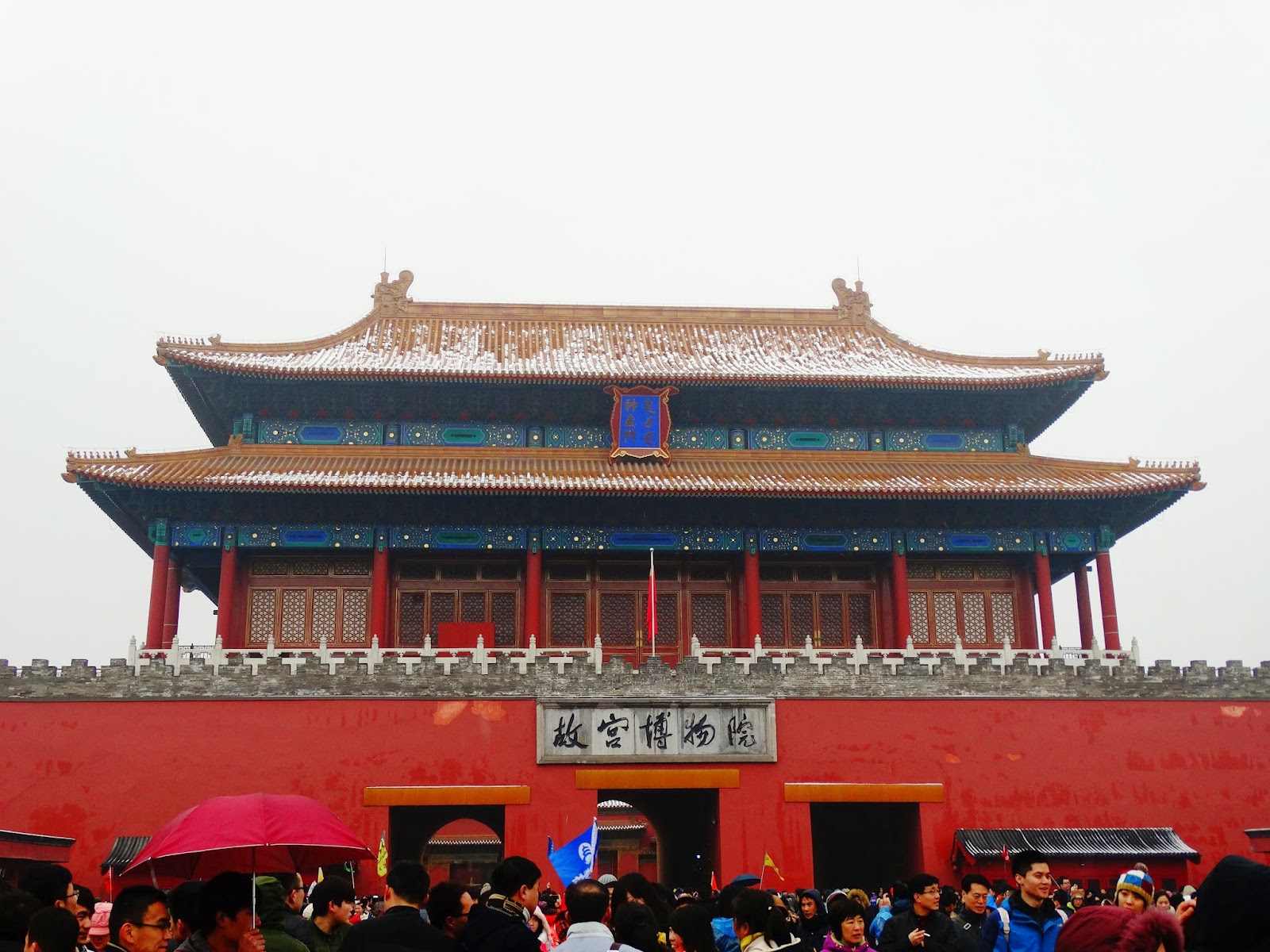 One of our worst experiences of the day was using the bathroom.  To enter the bathroom there was only one door instead of a set of double doors.  There were TONS of people trying to get inside, and no one seemed to care about letting anyone out. The result was just a huge crowd of people fiercely pushing, pushing, pushing! It got to the point where Jen and I literally couldn't move and were yelling at people to STOP! This was probably the most outrageous thing to us, especially since there were small children in the crowd.

Once we entered the bathroom, things unfortunately didn't get better. The smell inside was so overwhelmingly terrible that Jen and I instantly covered our noses and started coughing.  I'm pretty sure that this bathroom had never been cleaned. After waiting in line we tried to take care of our business as quickly as possible and get out of there and back into the fresh air. Normally I would try not to act like that--clearly the Chinese people were totally unphazed by both the pushing and the conditions inside the bathroom and Jen and I probably looked like rude foreigners...but there was really no way to hide our reactions in this situation...it totally took us by surprise.

We walked around the palace for a bit longer, but we were actually pretty miserable from the huge crowds and the wet snow. Eventually we called it quits and decided to make the walk back to the subway. Here's an interesting fact about China...you have to go through security before you get on the subway. Your bag has to be screened and you have to walk through a metal detector before you can even get on the subway.  It didn't seem like it was really very thorough though..it really seemed like it was more of a formality than anything else. 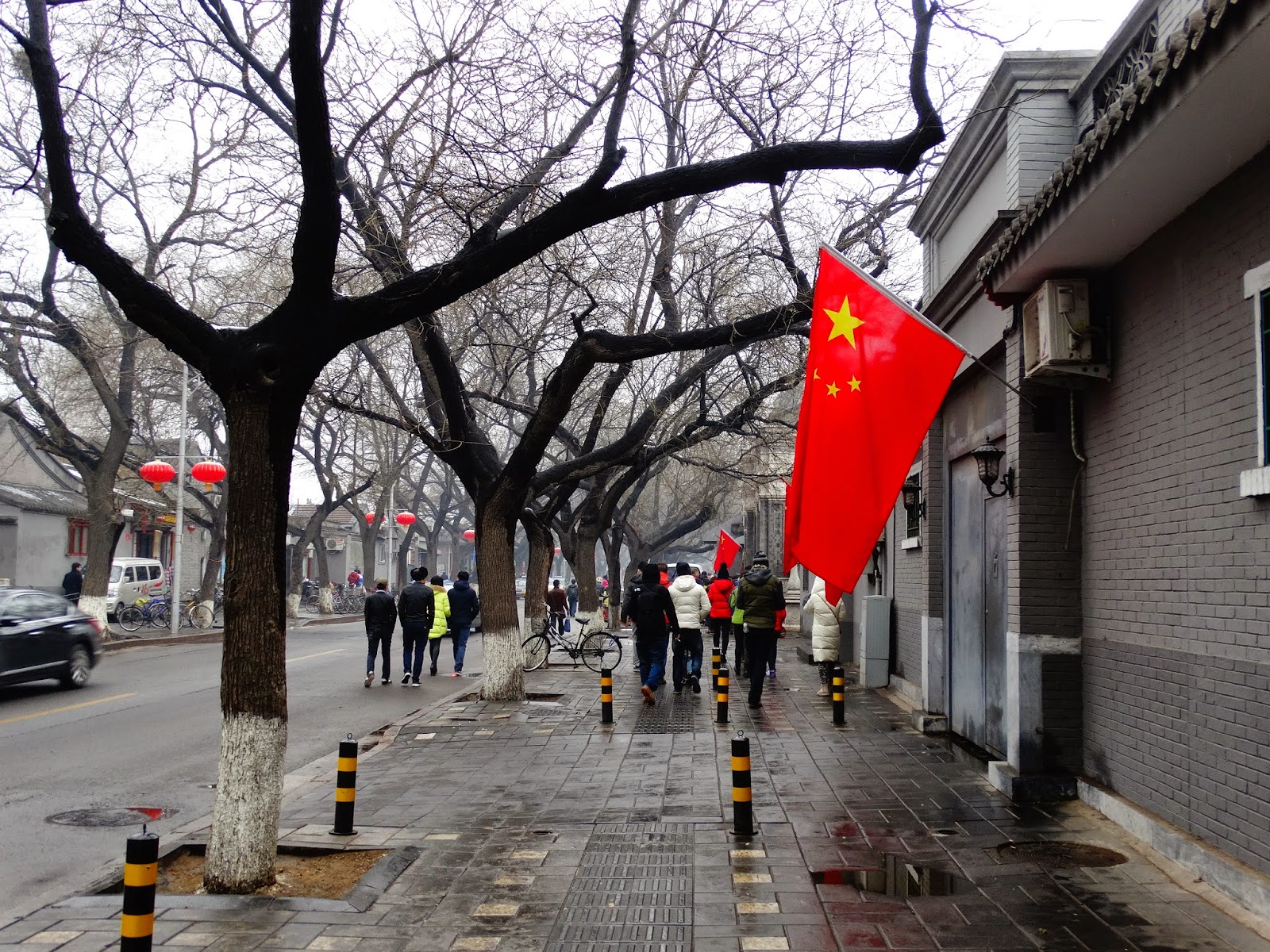 After we got back to the area near our hostel we had wanted to book tickets for a show that night, but the people at our hostel told us that the normal programs weren't happening because of the holiday.  This meant we didn't have any plans for the night, so we decided to get some food.  Unfortunately, something about what we had didn't quite agree with me and I had to spend the next hour laying in our room with an absolutely terrible stomachache.

We decided to stay at the hostel to make dumplings again that night instead of venturing back into the freezing cold.  We were totally beat from the day and didn't really care to go back into the cold or the huge, pushy crowds, so we spent the rest of the night resting in our room, hoping that our next day would be better.