That time I went to Vietnam...

It's hard to believe that it's been five months since I left Korea. Being home has had its highs and lows, but that's not really the point of this post.

My last month abroad was nothing short of pure insanity due to the fact that in the midst of packing up my apartment I also traveled to Vietnam, got a job, and consequently had to reschedule my departure date to leave Korea earlier than anticipated. Because of all this craziness, I never got a change to write about my trip to Vietnam. It's something I've wanted to do since I've been home, but my new job takes up just about every ounce of my free time. I also got a new computer, which meant that before I could even start to write I needed to transfer my pictures from my old computer to my new one--quite a chore in itself.

It's vacation time for everyone in Korea right now, which means my Facebook feed is filled with pictures of people traveling to warm places. These posts have naturally made me nostalgic about my own travels, which has given me the motivation to finally start writing about my trip to Vietnam and finish off this blog. I'm extremely thankful that I kept a journal while I was traveling (the biggest piece of advice I could give anyone who is going to travel--make the time to journal WHILE you're there!) because otherwise I honestly probably wouldn't be able to keep track of all that we did in Vietnam. Even five months later, the trip feels buried under my life back home.

Luckily I have my journal to tell me that we left for Vietnam on August 5th after staying in Seoul the night before (one of the many details that I had already forgotten).  Usually it's smooth sailing at the Incheon Airport, but that morning we actually hit really long lines, which meant we didn't have much time to rest or eat before boarding our flight. However, we made it in time, which is all that matters in the long run.

The flight from Korea to Hanoi was about four hours. Once we arrived in the airport we had to wait about half an hour to get our visas. After we had our passports back, we made our way to the arrival hall where the driver from our hotel was supposed to meet us. We didn't see him there so we decided to get a sandwich to eat in the meantime. The people at the sandwich shop were INCREDIBLY friendly. They helped us call our hotel to figure out where our driver was, and before we knew it we were on our way to our hotel.

At the hotel we had another incredibly warm welcome and were greeted with drinks and bananas. We talked with one of the men at the hotel about the trips to Ha Long Bay and Sapa and they told us it was better to go to Ha Long Bay first because there might be a storm later in the week. Trusting his input, we booked our trips, dropped our stuff off in our rooms, and decided to do a little exploring.

Our hotel was right in the heart of the Old Quarter-Hanoi's tourist hot-spot. The old buildings are evidence of France's colonial past in Vietnam, and while the history behind that part in Vietnam's past is ugly, the blending of architecture is quite lovely. 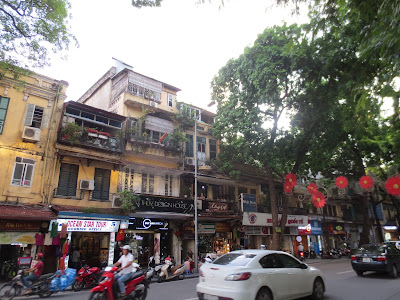 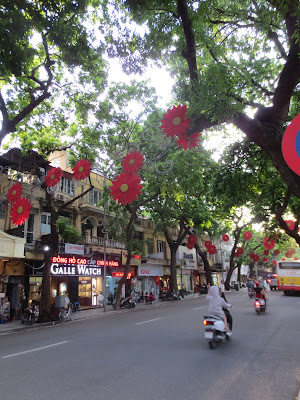 Apart from the architecture, the other thing that immediately made an impression on me was the absurd number of motorbikes. The driving in Asia is crazy in general, but Vietnam takes the cake for absolute scariest driving. The motorbikes are constant and don't stop for anyone. Crossing the street is literally like a game of frogger. 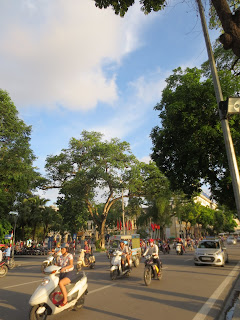 We walked around for a while, and when we came to a lake we stopped for a beer. The weather was surprisingly cooler than it was in Korea, which was a welcome and refreshing surprise in the midst of Korea's oppressively hot summer. 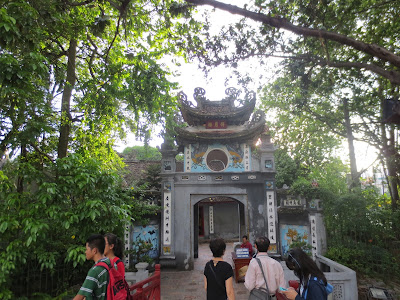 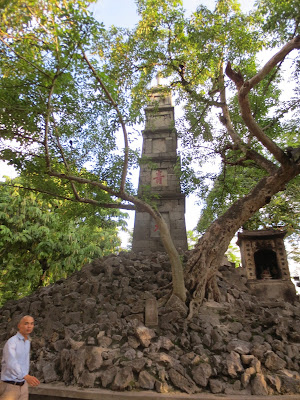 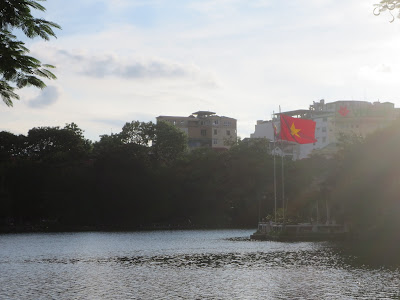 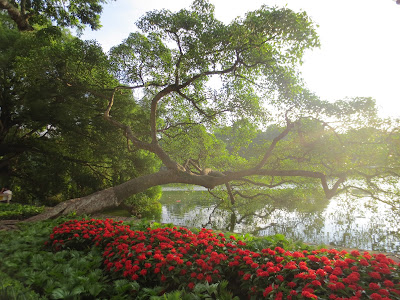 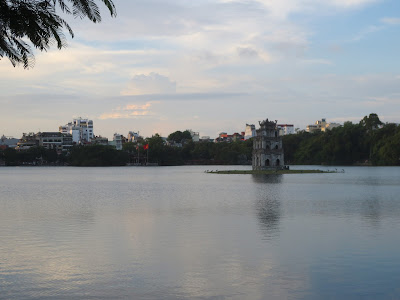 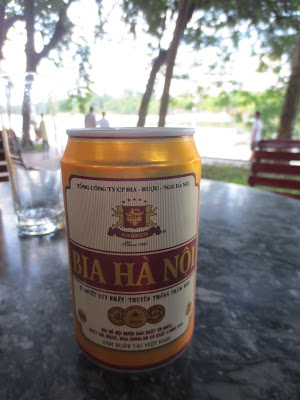 After we finished our beer, we wandered for a little more until we settled on a place for dinner. The restaurant had some young people working there who were super eager to speak with us to practice English. They were absolutely adorable kids, and it seriously made me wish I could have them as students. For all the mixed things I had heard about Vietnam, I was very pleasantly surprised by the incredibly friendly people we were encountering in our first hours there.

We had some pho and spring rolls for dinner and they beyond delicious. Definitely the right way to start our time in Vietnam! 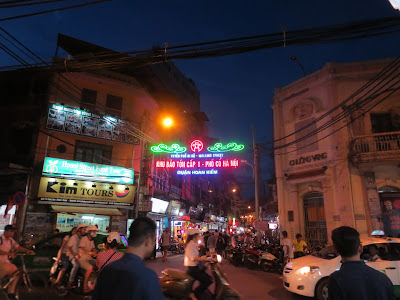 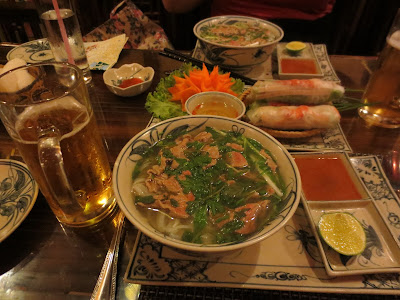