After getting my fill of Siem Reap's temples and tourist-friendly Pub Street, it was time to move onto Cambodia's capital city, Phnom Penh. I had read that Phnom Penh was a bit more rough around the edges, and it was immediately clear to me that that was in fact true.  I had a smooth bus ride of about seven hours to Phnom Penh, but as we entered the city I noticed that everything seemed much more rundown that it did in Siem Reap.  As I got off the bus and headed towards the tuk-tuks to take me to the hostel, I noticed that the passenger part of the tuk-tuks either had curtains or some sort of fence along the sides--obviously to prevent bag snatching, which put me on higher alert to be careful during my time in the city. After getting to my hostel, which was incredibly nice but VERY quiet, I settled in and got some sleep to begin my sightseeing the next day.

While people travel to Siem Reap to see the incredible remnants of the Khmer Empire, tourists in Phnom Penh are almost always there to learn about the darker side of Cambodian history.  Before I came to Cambodia I read the books First They Killed My Father, Lucky Child  and Lulu in the Sky by Loung Ung, a survivor of the Cambodian genocide. Ung's memorirs detail what it was like to live in Cambodia during the genocide, as well as her experiences of growing up in America after the war. These were amazing reads, and as a result I was decently familiar with what happened in Cambodia during the 1970s before I came to Phnom Penh.

However, since most people aren't familiar with Cambodia's history, here's a little background info. From 1975-1979 about 1.7 million Cambodians (about 21% of the country's population at the time) died under the regime of the Khmer Rouge, led by the brutal leader, Pol Pot.  The Khmer Rouge aimed to create a classless, agrarian society and stopped at nothing to pursue this goal.

Before the Khmer Rouge came to power, Phnom Penh was a vibrant city with many modern facilities. However, once the Khmer Rouge took over, those who lived in the cities were forced to leave their homes.  People were relocated to labor camps, where many people starved to death or died of other diseases that were rampant in the camps.

Since the Khmer Rouge aimed to create an agrarian society, people who held educational, religious, or professional jobs were seen as a threat to the mission of the Khmer.  That means doctors, teachers, monks, lawyers and any previous government officials were often killed if their identities were found out.  The families of these people were also killed to prevent any sort of future uprising out of retaliation against the Khmer Rouge.

One of the main spots to visit in in Phnom Penh to learn more about the genocide is the Choeung Ek Genocidal Center.  This center is more commonly referred to as "The Killing Fields" because it is one of the many locations throughout Cambodia where the Khmer Rouge killed mass numbers of people.  Anyone who was seen as any sort of threat to the Khmer Rouge was put to death, along with their families, and their bodies were thrown into mass graves.

When you visit the Choeung Ek Genocidal Center, you are given an audio tour, which describes exactly what went on at each point in the Killing Fields. As you can imagine, it's completely heartbreaking to hear about what went on there. Since bullets were expensive and the Khmer Rouge didn't have much money, most of the people were killed through force to the head, often with metal tools, then thrown into mass graves.

So many people were killed at this killing field that there are signs through the tour telling you not to step on any bones because during the rainy season bones and fragments from the bodies still wash up to this day.  Perhaps most disturbing was the tree near one of the mass graves. Today it looks just like any other tree, but during the Khmer Rouge's reign, babies were grabbed by the legs then hit against the tree until they were dead.  When you hear the stories like these about the Khmer Rouge, it's hard to imagine a purer manifestation of evil. 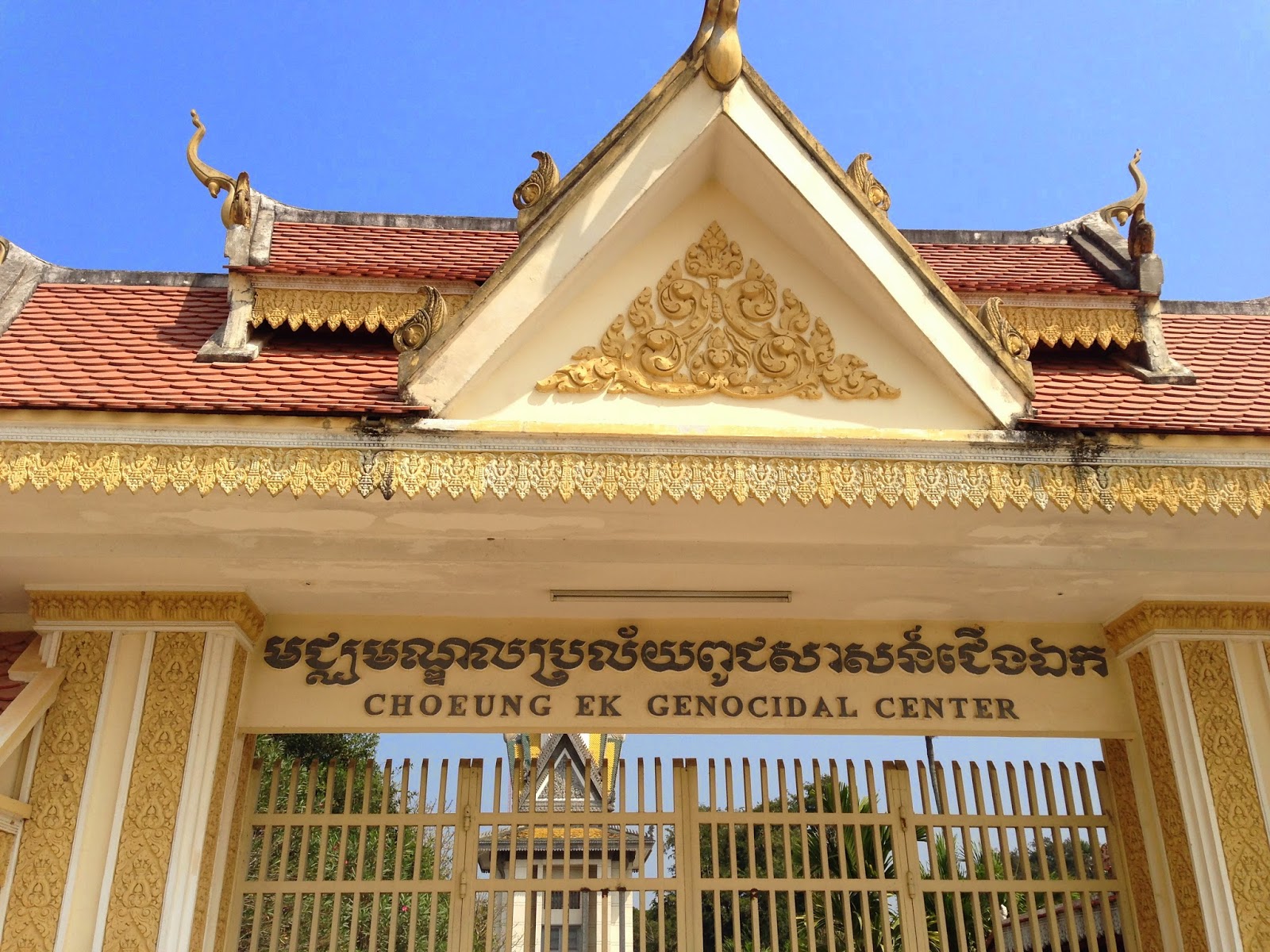 At the end of the tour I entered a large memorial, which houses skulls, bones, and clothing from the victims.  The number of remains is devastating to see--I couldn't help but wonder who these people were, what kind of hell on earth they suffered through, and where they would have been today if they would have survived. While the events described during the audio tour sometimes seem too horrible to be true, this display certainly cements the fact that these were real people with real lives who suffered this fate.

After finishing at the Killing Fields, I decided to keep going and have my tuk-tuk driver bring me to the S-21 Genocide Museum.  This former high school was turned into a prison and torture site during the reign of the Khmer Rouge.  Many of the people at the prison right were kept there before they were brought to the Killing Fields.

The museum contains pictures and stories about the people who were held at the prison.  It's haunting to see the faces of these people staring at you, knowing that had I been born in Cambodia at that time, I could have had the same fate. It's unthinkable how a place that was built to foster education to provide young people with a better future could eventually became a place of such horror. 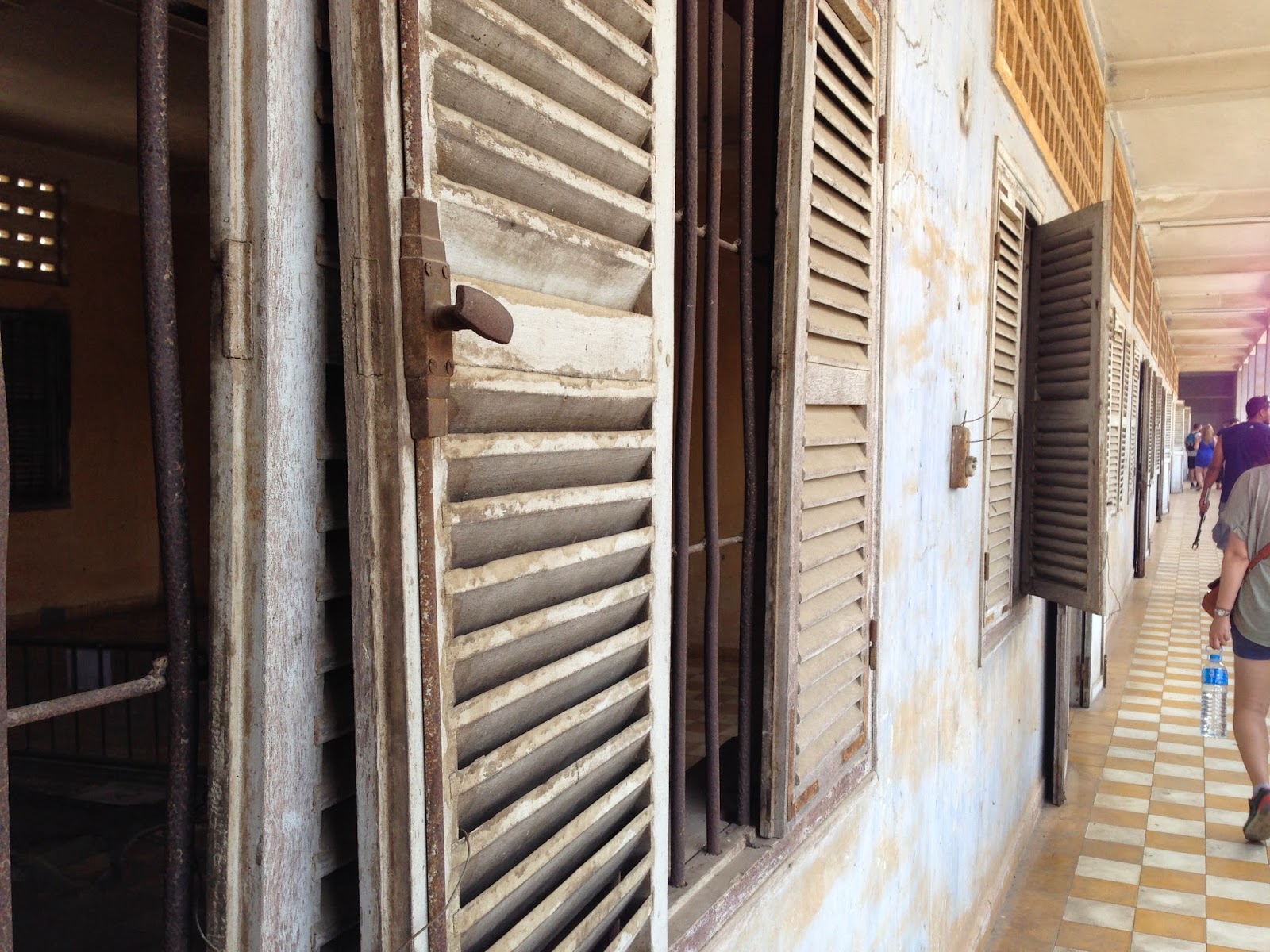 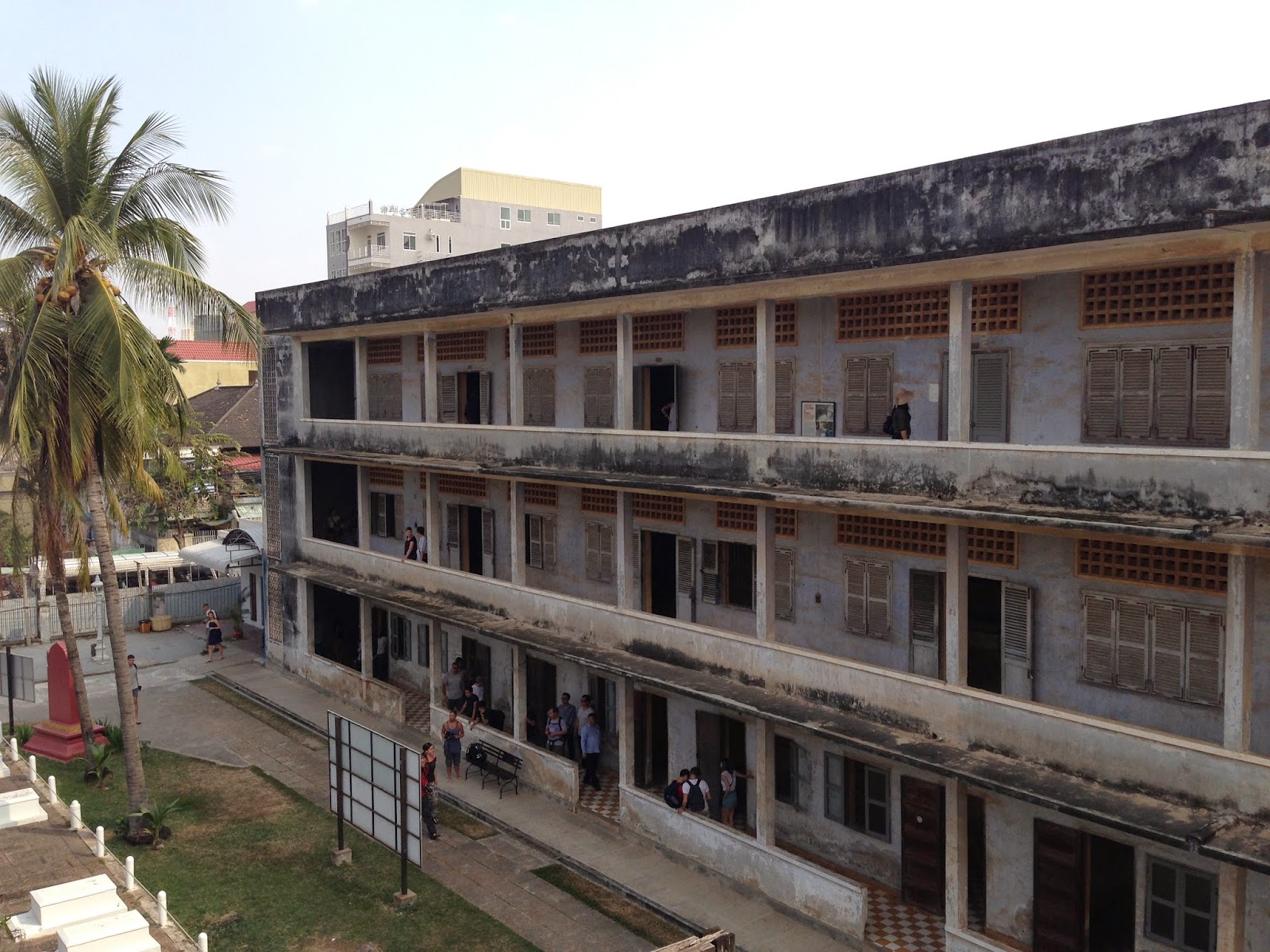 Often when we learn about tragic events in history, we like to think that they are in the past--that they will never happen again within our lifetime.  However, as I learned more about the Cambodian Genocide, all I could think about were the people currently suffering and being brutally killed under groups like ISIS and Boko Haram.  I'll never understand how people can become such monsters, so desperate for power that they lack any sort of empathy or decent humanity.

During my time in Cambodia, I frequently wondered about what the people I encountered had endured during their lives.  Cambodia is a developing country, and it's easy to see why when you know the history of the country.  Imagine having over 20% of your country killed and trying to rebuild when educators, doctors, and lawyers were all strategically killed over a span of four years.

Despite these challenges, people in Cambodia are extremely friendly and for the most part seem to be extremely happy.  While we may look at their living conditions and wonder how they could possibly be happy, perhaps it's important to remember the things they have endured and survived.  It's common for tourists to remark that "How are they so happy when they have so little?"  But I often thought, why should it be surprising to us that they are happy with so little?  What does it say about us that we think our "stuff" is the most important key to our happiness?   Why is it so unfathomable to us that people without big houses and nice clothes are happy?  If we are safe, healthy, and surrounded by friends and family, truly we have much more than we often realize.


Perhaps those who lived through such horrific times have learned lessons many of us never will. As I finished reading the book Lulu in the Sky by Loung Ung, a survivor of the genocide, I came across a quote that reminded me that although there is evil in the world, there is also so much more good in people. I'll leave you with this salient thought from Ung:

"In the darkness, there was light, and in war, there was also love.  As a daughter of Cambodia, I had witnessed the worst of man's inhumanity to man, but in the love of my mother, the bravery of my father, the kinship of my siblings, the pride of my countrymen and women, the work of my colleagues, and the grace and beauty of friends and family, I had also seen the very best of man's humanity to man."