A Day in the Mekong Delta

One of the "must-see" parts of southern Vietnam is the Mekong Delta, a lush area which is responsible for producing rice and other agricultural products for the majority of the country. Since I only had enough time to make a quick stop to this famous part of the country, I booked a day tour through my hostel and got aboard the bus at 7:30 AM to begin the two hour journey to the Delta.

Once we arrived at the Delta, we got on a boat that took us to a small island. We made a quick stop to see some local beekeepers. Given I have a large and irrational fear of bees, this was not my favorite stop and I was quite ready to keep things moving. 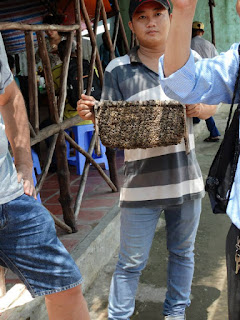 It didn't take too long for them to move us along to the next stop: a small table containing some local fruit where we were to stay and eat while some local women came in traditional Vietnamese clothing and sang a few songs for us. Of course, it didn't take long before they put out little baskets for money on our tables. It was quickly occurring to me that this day would contain plenty of tourist traps. This kind of thing isn't unusual in SE Asia--foreigners are eager to see certain parts of these countries, and the locals have found just about every way to profit off of it (and who can blame them, really).

After the small performance, we got in some small boats in which we were rowed around the Mekong. This was probably my favorite part of the tour because as we floated down the brown water, we got a sense of the thick vegetation in the area. 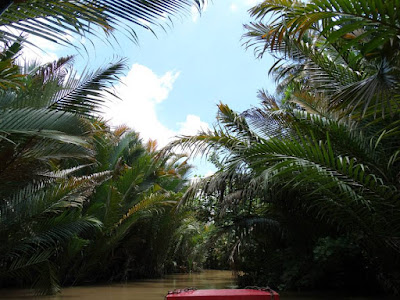 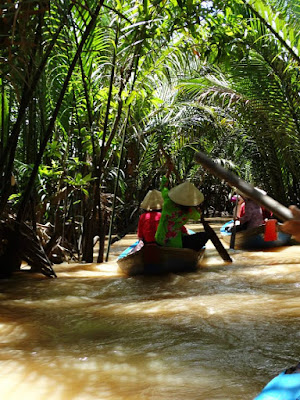 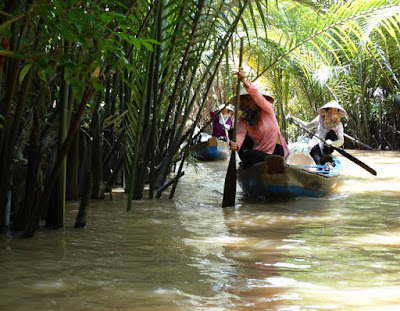 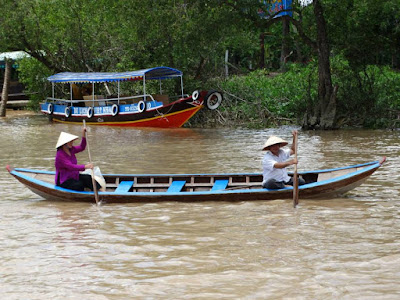 Next we went to another area in which they showed us some of the candy they make in the area using coconuts. I'll admit, the candy was good, but it was basically another tourist dumping ground consisting of a very short demonstration and a long break where we were expected to buy stuff.

Following the candy stop, it was time for lunch. We were told repeatedly throughout the tour that the lunch we would be given would be very small, and really we should order more. Of course, the lunch provided on the tour was plenty adequate, so I was glad I did't fall for their efforts to get us to spend more. I spent lunch with a group three older men, all of whom had lived in all different parts of the world during their lives. It was really interesting talking to them, but lunch seemed way too long given there was pretty much nothing to do in that location besides going to take a look at some of the crocodiles (or were they alligators?) 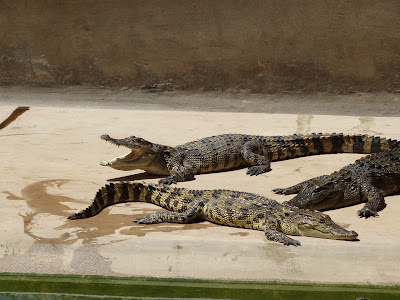 After lunch it was time to head back to our bus, after which we made the ride back to the hostel. Overall, I was less than impressed with this tour. At a certain point it becomes frustrating when you're constantly dropped off at a location, given a two minute demonstration, and then expected to buy something. Although I can understand why this happens given the fact that we are incredibly rich by the standards of most locals, I feel like I learned very little about life in the Mekong Delta during this tour. Maybe I just got unlucky with my tour guide, but I think I wouldn't have minded the constant expectation to buy something if I had at least been able to learn more during the tour. With that said, I'm glad I at least got a taste of the Mekong Delta. It was worth the day just for the ride in the boat down the river because that is an experience that has stuck with me, even nearly a year later.