The Chuseok Hike: An experience I will always remember

Today’s article is written for the Reach To Teach Teach Abroad Blog Carnival, a monthly series that focuses on providing helpful tips and advice to ESL teachers around the globe. I'll be posting a new ESL related article on my blog on the 5th of every month. Check back for more articles, and if you'd like to contribute to next month's Blog Carnival, please contact Dean at dean@reachtoteachrecruiting.com, and he will let you know how you can start participating!

Topic: Tell us about an experience you've had while traveling that you will always remember.

I have only been in South Korea for about a month and a half. In comparison to most people I have met here, I have done very little traveling.  Many people I've met here have been all around Asia, Europe, you name it.  I haven't been many places yet, but within my first month of being abroad I have already managed to see some incredible things and gain some unforgettable memories.

Over Chuseok break last month, I went to Ulsan to visit some of my friends form orientation.  The first night I was there, we had a great time enjoying the nightlife and were out until 5 AM.  This would have been fine, except that we had already established plans to go hiking the next morning.

After four short hours or sleep we rolled out of bed, still determined not to change our plans. We slept until the last possible minute, but we still made it on time to meet up with a bunch of other EPIK teachers and head to a mountain about an hour outside of the city.

While we were on the bus, we met another group of westerners who were headed to the same location for the weekend.  The difference between their group and our group was immediately apparent. While we were just a group of twenty-somethings looking for a little nature, they were going for a full on weekend in the woods.  They had backpacks filled with food, water, and camping supplies.  They had all the fancy equipment that only LEGIT outdoorsy people have.

We started talking to them a bit on the bus, and when we reached our destination one of the girls offered to show us to a short hike to a waterfall.

Now, everyone in our group was tired on account of the four hours of sleep we got the previous night. Some people in our group (and thankfully, I was not a part of this group) were still feeling the effects of the alcohol they consumed the night before.

The girl told us that it would be about a 40 minute walk to the trail from where we were, and another 40 minutes to the waterfall.

Now, to a group of over-tired and somewhat hungover people who had not exercised since arriving in Korea, this sounded like the PERFECT day for us.  We could do a little hike, see a nice view, and be back in the city by a reasonable hour.  We were thankful to her, and assumed that since she had been there before (and had all the legit hiking gear to boot), she must know her way around.

We gladly accepted her offer to show us to the waterfall, and started to walk along the main road of the mountain.

And then we continued to walk....

The "40 minute walk" quickly turned into an hour, but we thought we HAD to be close to the trail. Every time we got to the stop of a particularly steep part of the mountain, we would tell ourselves we MUST almost be there.

If we were just walking along a flat road, this hour probably wouldn't have seemed so bad.  Of course, we were climbing up a full-fledged mountain in the blazing hot sun, on hot pavement.  As cars passed by us, we could see their faces in dismay as they wondered why the group of foreigners was walking up a road that was CLEARLY not meant to be walked along.


As we continued to walk, an hour turned into two hours, and we had no idea when we would even get to the trail.  As we were walking, our group got split into two main groups.  Somewhere along the line, the girl who was supposed to show us the way got in a cab with one other girl to get to the entrance of the trail.

WHAT?!  Our guide had left us and we had no idea where we were.  Needless to say, we were not thrilled.

However, we had no choice but to keep walking up what seemed to be the steepest and most excruciating hills in Korea.

Much to our dismay, we still had to climb up another road made entirely of pavement.  This road was potentially even worse than the main road--it was so steep that it almost seemed like Korea was playing a cruel joke on us. 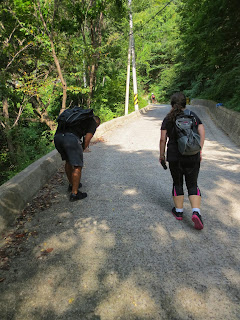 After about another 45 minutes, we finally made it the trail.  Needless to say, we all rejoiced when we were FINALLY WALKING IN THE WOODS!  It had never been so hard just to BEGIN a hike.

Eventually we were all reunited at the waterfall, and after relaxing for a while, we headed back to the bus station.

To get back to the bus station, we had to walk through an area that seemed pretty much completely stranded.  We finally found the bus stop....when the people in the first group called to tell us that we had just missed the last bus.

Normally the bus would still be running, but it was Chuseok, so the buses were running on a different schedule.

So there we were.  Completely exhausted, wanting to do nothing more than to take a shower and sleep, but we were stranded in the middle of nowhere.  In Korea.  Where none of us speak the language.

Luckily, the bus stop was right next to a convenience store, which thankfully was open.  We had to use our best gesturing to ask the store owner to call a cab for us--we had no idea where we were, so trying to explain where to get picked up would have been impossible.

Thankfully, the store owner called us a cab, and we waited for about 30 minutes wondering how we would get back home once we got to the bus station.

The cab ride was an adventure of its own, and for a bit we were convinced we weren't going to even make it to the bus station alive.  Driving rules in Korea are pretty much non-existent, and our cab driver apparently thought it was a good idea to drive down the mountain in the middle of the road at approximately 100 MPH.
Our cab driver eventually brought us to the bus station (after ALMOST taking us to the KTX station....), and we met up with the other members of our group.

Alas! We were happy to be a bit more in civilization, but we still had no idea where we were or what bus we needed to take to get back.  We spent about the next half hour trying to use our minimal Korean skills to figure out which bus we needed.

As we were standing in the bus terminal, a bunch of people got off of one bus.  One of the men that got off the bus was obviously extremely intoxicated, turned to the wall of the station, and started to pee only about 10 feet away from us.

It really just added to the atmosphere of the day.

After he relieved himself, the drunk man started to talk to us, and needless to say we were beyond thankful when our bus arrived and we could escape that situation.

We hopped on, and eventually got dropped off at the center of the city.  From there it was another half-hour drive back to my friend's neighborhood.

It goes without saying we all couldn't be more excited to take a shower and get some sleep.  Originally we had planned to go out with friends at night, but it was past 9:00 by the time we got home, and there was no way we had an ounce of energy left to do anything.

We went to bed at 10:00 and slept straight for 11 hours.  I slept on my friend's floor that night, but I think it was still one of the best nights of sleep I've ever gotten.

This day was obviously far from perfect.  In fact, just about everything that could have gone wrong, did.  It wasn't the day any of us had imagined, however it is a day that we will all NEVER forget.

Since I've been in Korea, I've had days that have gone perfectly.  There have been trips where no issues arise, and there are no surprises.

However, when you travel, sometimes things do go wrong.  Sometimes you seem to get the worst of luck, but that's just part of life.  The surprises that come along the way are what make traveling exciting and unforgettable.

While this day way trying and exhausting, it is in the toughest situations where your character is tested and you learn just what you are capable of.  Sometimes it's great to have a day where everything goes perfectly and comes easily, but in the end, days like the one of this hike are what really test what you're made of and make you appreciate all of the accomplishments of the day, whether it be climbing up the side of a mountain, or finding your way back home.

When I was younger and I had tough moments in life, my dad would always tell me that "it builds character."  This used to infuriate me, and I used to tell him I didn't need any more character.  However, now that I am older, I realize that he was right.  Without the tough moments, life would be boring.  I'd much rather live an interesting life where I am learning from challenges, than an easy life that it boring.
Posted by Sarah at 4:04 PM